After seven weeks of development, last Friday we were delighted to finally unlock www.rgudigital.com and soft-launch The Digital Scot into the world.

We have come a long way as a team since we started working on this project at the start of February. During the first week of term we submitted job applications for the positions that we were interested in, and after being allocated our roles, we were presented with a login to a WordPress account and a URL and were told to get going!

Initial brainstorming sessions lead to primitive ideas, which allowed us to develop audience personas and move on to content strategy. At the same time our web team were working on the design, colour palettes and multimedia features for the website, and the Communications and Outreach teams had commenced reaching out to previous guest lecturers and key local influencers.

By week five we had a site ready to present to our Course Leaders, and nervously unveiled it with our goals and targets, alongside our branding, content and strategy. As is expected in the Industry, our ‘Client’ sent us away with plenty of feedback to work on and we returned a week later with a more refined version.

With final proofreading complete and the permission to launch attained, on the 27th of March we quietly unlocked the site and began using our social media channels. Family, friends and digital contacts started viewing, and The Digital Scot quickly caught the attention of local agencies who retweeted us and announced us as a #FF to boost our signal. By the end of the weekend we had over 300 followers on Facebook and Twitter combined and the site had received 125 unique visitors, but had it all ran smoothly? Well not quite… 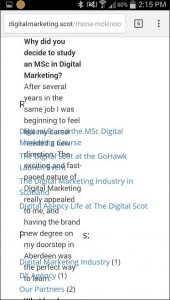 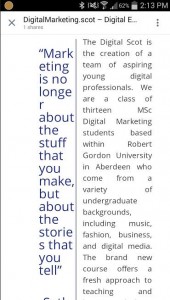 Unfortunately we quickly discovered that the mobile site was displaying very poorly on Windows phones and adjustments made to it then negatively affected the responsive version on iPad and iPhone. After a couple of days of testing different plugins and altering code, we finally achieved a satisfactory interface on all platforms.

We also sent a feedback survey to a selection of people from a wide variety of ages and backgrounds. Whilst feedback was mainly positive, we received plenty of suggestions of areas for improvement, which allowed us to see the site from an outside perspective.

The Digital Scot will continue to evolve over the coming weeks as we strive to make it the best it can be. One thing we must remember, however, is to be careful when editing a live site! On Monday afternoon for fun we changed the desktop cursor to a miniature Angus the Octopus; little did we know that at that exact moment, some members of 5th Ring were viewing the site!

Angus certainly gained a couple of fans that afternoon, but reverted to his usual position in the Header by Tuesday morning. Much as we all love the Octopus, this functionality for functionality’s sake was a small step too far!